The State of Microsoft’s Matter Center

History –  At the end of 2015, with tremendous excitement, Microsoft released to Github all the source code for their ‘highly acclaimed” Matter Center.  The Matter Center was developed by Microsoft Legal Department for the sole purpose of providing an easy to use mechanism to turn Office365 and SharePoint online into a world class legal document management system. During 2014 and 2015, Microsoft had shown the Matter Center off at various legal technology venues to great fanfare, leading to much anticipation for its release and support to the legal community.  By mid-2016, some of the guiding lights in the legal vertical in both the press and in the legal consultant diaspora proclaimed “the Matter Center is dead”.  Some even said using Office365/SharePoint Online as a DMS platform was now settled.  It was a failed concept.

When the Matter Center was released, 12 modules and 90,000 lines of code, it was designed to deploy “one kind/type of DMS on SharePoint”.  It was not as the Press and Consultants of 2015 had seemed to want:  A software product like Word, PowerPoint and Excel.  It is and was a framework software package where developers could take modules and deploy based on Enterprise/Legal (or non-legal) requirements and turn Office365 into a content management document management AND e-mail management platform.  It was a smashing success.  The Matter Center is alive and thriving, deployed as a fully customizable web part that can be configured as a customized starting point for creating a Matter/Project Centric Document/Content Management System on SharePoint.  The original Matter Center has seen code changes by the vendors who deploy their versions of the Matter Center, such as Epona whose version does NOT require Azure to be deployed.

What does a fully customizable Document Management System utilizing vendor developed Matter Centers look like?  It really can look any way that you want it too.  The Matter Center makes a unified systemic SharePoint matter/project centric system simple to operate. 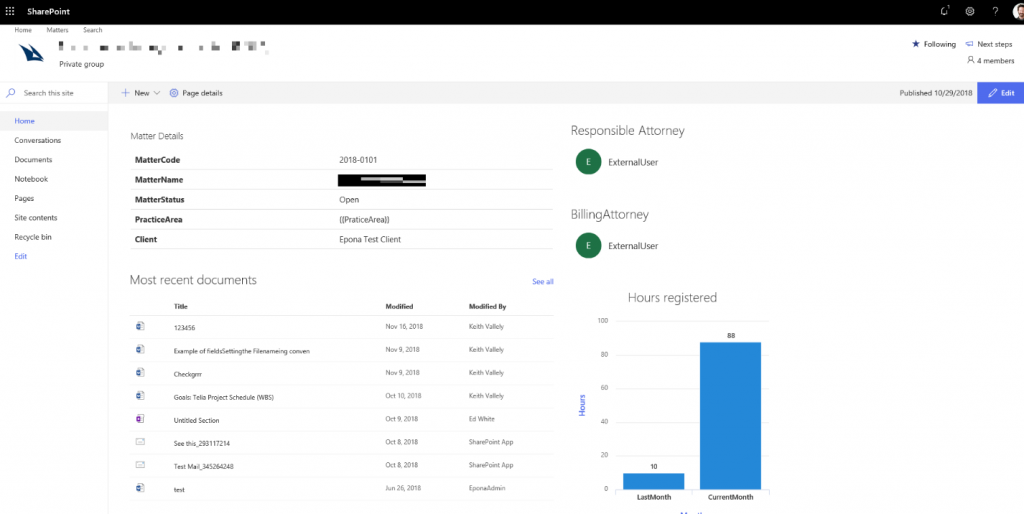 It provides an easy to use, Matter/Project/WorkSpace creation interface.  It makes it so an enduser (when not fully automated by being attached to a Financial Practice or Matter Management system) can easily create a Matter/Project/WorkSpace site.  Assuming a firm chooses Office365 as the core platform, every Matter/Project site will also get a OneDrive for Business for offline access, Workflow, Calendar, Tasks, or a Planner, Document ID’s, Version Control, Collaboration capabilities and much more.  Is that all, is there more? 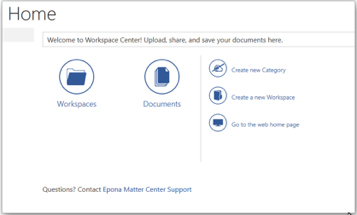 Well, that depends on the design architecture which varies from Business to Business, and Firm to Firm.  If your enterprises wants to use Microsoft Office365 Groups and Teams, each Matter/Project will get the ability to have a Team, and an Email Box.  If your enterprise has different constraints and security concerns, then straight SharePoint without O365 Groups or Teams can also be chosen.  Want an Extranet whenever a Project or Matter is provisioned?  No problem. Matter/Project Sites can also be created that provide BI information, and third-party data access on the Matter/Project landing pages.  The holy grail of fully customized Document / Content management that is fully integrated onto a single platform that also includes the entire global suite of capabilities that Microsoft provides on Office365 is now here, and it is best created using the Matter Center process.  What does this mean?  It means that by pressing a button, a Matter Center Project/Matter can have Records Management Activated, or Litigation Hold turned on, at no additional cost.  That’s right.  No additional cost, because you are using Microsoft Office365.

You decide what to capture 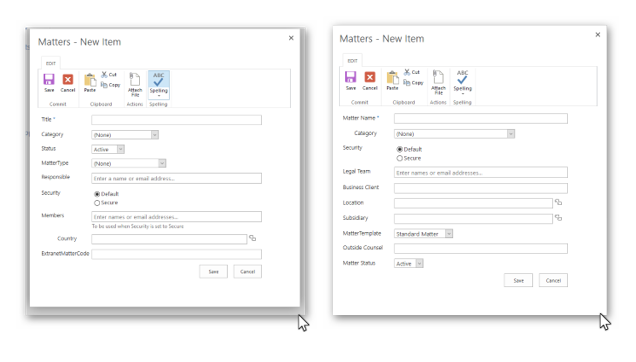 Are there other elements of the Matter Center that can provide value for the Firms, Businesses, or Corporate Legal Departments that someone contemplating leaving behind the legacy systems should know about?  The Matter Center by Epona (as an example) combines everything you have read here, with reporting capabilities, matter based security settings, and more.  Creating a Matter using the Matter Center (or a Project or Workspace) can be the interface where data that can be used for reporting about the matters themselves can be created.  Remember, the Matter Center is now fully customizable by technology partners so creating Matters/Projects as well as creating Clients/Categories is a matter of asking “what kind of information do you want to capture” and then determining which of that data is to be used for Matter/Project creation (as metadata) and which is to be used for reporting.  Below is an example of how one Firm was able to capture 18 data elements (for reporting) and 4 matter metadata fields. 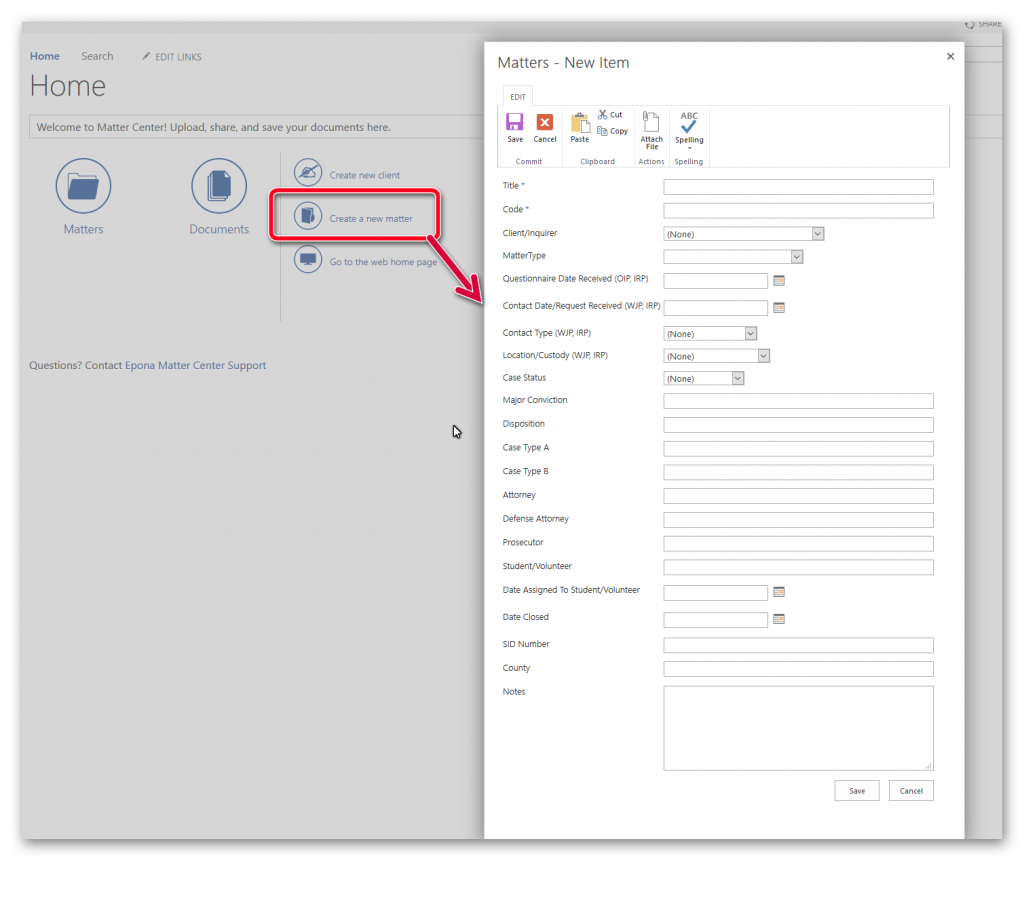 When deploying a Matter Center instance, the technology partner must consult with their client and determine how much data is to be captured before Matter/Project creation, and what is to be used for document metadata tags, and what is to be used for reporting purposes.  In Corporate Legal environments, reporting that is easy to access, and simple to collect, that is tied directly to the matters they are working on is very hard to come by.  With the Matter Center, this issue is put to bed easily.

Of course, the screen you see above in most cases going to be “too much” for a typical enduser at a firm to fill out.  So more common deployments will utilize simpler matter creation screens where users can determine if a Microsoft Team is to be created along with the Matter/Project, as well as if the Matter/Project is to be kept private, which is to create it with a restricted access model.  Where does the security models, users, and the like come from?  Active Directory or SharePoint security, which again means the internal IT Departments of the enterprises that utilize the Matter Center do not have to worry if there is a ‘third party’ security model.  The beauty of the Matter Center is that it is Microsoft developed and so its functionality and capabilities are based and rely on other, ubiquitous Microsoft technologies.    Here are two examples of Matter and Project creation screens: 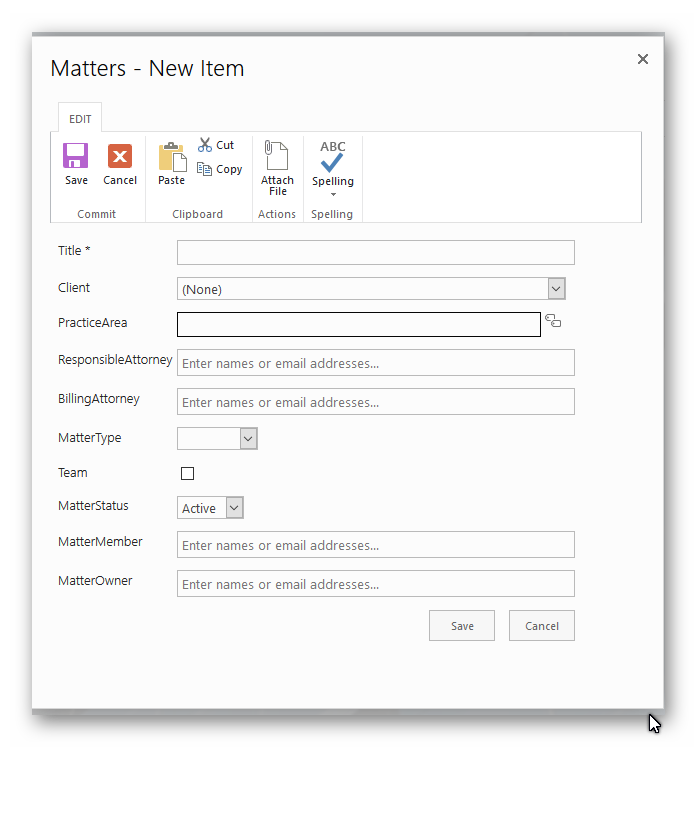 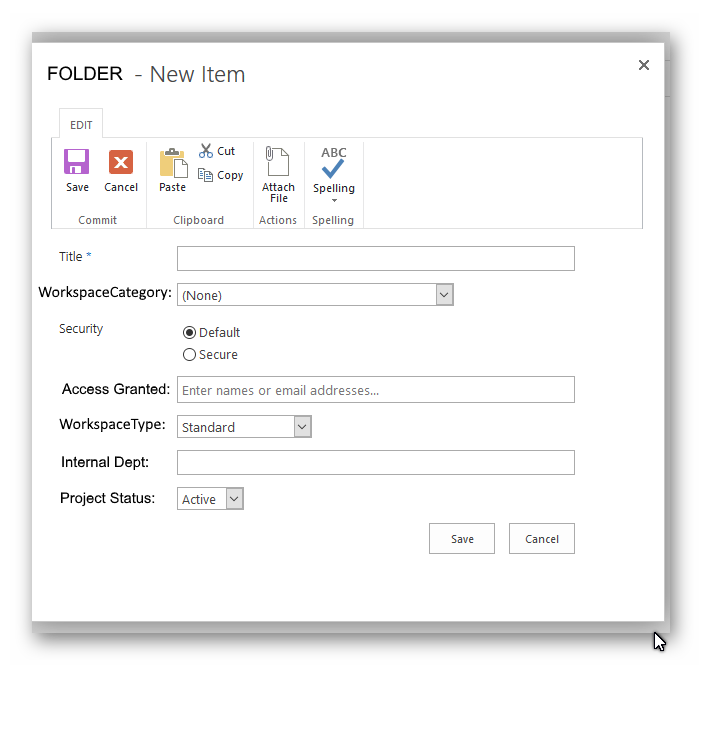 Looking forward, what is next for the Matter Center software development?  Once the Matter Center became open source, its direction became driven by the users of SharePoint, the Legal and Non-Legal communities, and what they seek in Matter/Content management.  I believe this is what Microsoft may have had in mind but didn’t know how to get there using their very big foot print.  From what Microsoft Professionals tell me, they are not in the business of verticals.  They are the horizontal company. 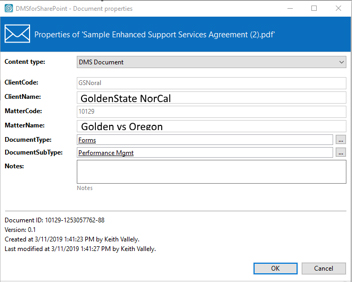 They make software for every business.  And if you click that Waffle in Office365 it becomes clear as to their intentions.  Microsoft intends to be the next utility that we all pay rent to, just like cableTV and Water.  They were looking to give the legal vertical the tools they needed to build up and into the Office365 cloud.  The Matter Center does exactly that.  At Epona, we have over 500 in production Matter Center firms and companies, and the numbers of clients continues to expand, as does the business kinds and types of deployments, due in part to the immense flexibility of Office365 and the Matter Center.  If I were a gambler, I would bet that Office365 will replace the legacy DMS platforms one by one.  Why? Because the Matter Center deployments themselves drive the core use, which leads to fully taking advantage of the platform that sits in nearly every Fortune 1000 and AMLAW 200 firms desktop, the Office365 cloud…which is currently massively under-utilized.